Crystal Cruises’ ambitious expansion plans are beginning to slow down. Work is progressing on building the first of six planned river ships, but the arrival of an innovative expedition ship and the first 1,000-passenger Exclusive-class ship have been deferred.

Endeavor, announced at a lavish event in Fort Lauderdale in March, was promised for August 2018 but will not now be ready until 2019. The Exclusive ship has already been postponed by a year and has now been put back two more years, to 2021.

There is no word on when its promised two sisters will be complete, but there are hints that Endeavor will be joined by another vessel of the same design.

The announcement was made by Colin Au, founding president of Genting HK, which bought Crystal in 2014, during a visit to the German shipyards bought by the company to carry out the Crystal expansion and to build vessels for China-based Dream Cruises.

Eager to put a positive spin on the schedule changes, Crystal president Edie Rodriguez told me there was now an opportunity to prioritise enhancements to the line’s existing ocean ships, Crystal Symphony and Crystal Serenity.

She said she that consultation with regular guests revealed that “while they are all tremendously excited with our new luxury river yachts, megayachts, ocean ships and private jets, they continue to express their fondness for our award-winning ocean vessels.

“Next month I will officially announce these enhancements, along with other developments to our expanding fleet, including a second polar-class megayacht to join Endeavor, and a peek into the Crystal ball for future delivery timelines.”

Two river ships will be completed next year, with a further two launching in 2018.

Plans for Crystal Luxury Air have also been pared back, and the order for a Boeing Dreamliner to carry 100 guests in first-class luxury has been cancelled. But designs for the surviving Boeing 777, expected to take to the skies in 12 months’ time, show a restaurant area complete with dining tables separate from the accommodation.

The plane will carry 84 guests – attended by butlers – on round-the-world air cruises of 14, 21, or 28 days. Cuisine will be prepared by an executive chef in two state-of-the-art galleys and paired with a premium wine list.

“Crystal AirCruises is not just a thrilling new venture for Crystal, but a groundbreaking development in the luxury travel industry,” says Rodriguez. “Even the savviest travellers and guests who have sailed on our award-winning ocean cruises many times will relish brand new opportunities to explore places impossible to reach by water, all with Crystal’s signature personalised service and the highest standard of luxury at every point of travel.” 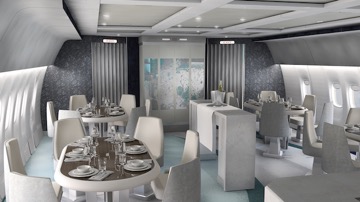 Crystal’s Boeing 777 has a dining room and bar