Carnival Corporation has today added two more cruise ships to its order book and now has 19 vessels scheduled for delivery between 2017 and 2022.

The latest orders are for Princess Cruises and Holland America Line. Britain’s P&O Cruises takes delivery of a new ship in 2020, but there are still no plans for Cunard Line to add to its fleet of three Queens.

The Carnival announcement in full:

Carnival Corporation & plc, the world’s largest leisure travel company, today announced that it has signed a memorandum of agreement with Italian shipbuilder Fincantieri S.p.A. to build two new cruise ships with final contracts expected to be executed in early 2017. The two new ships are designated for the company’s Holland America Line and Princess Cruises brands. With the new agreement, Carnival Corporation now has 19 new ships scheduled to be delivered between 2017 and 2022.

“We are extremely pleased to formally announce these two new ships and build on the success and popularity of their sister ships already sailing guests around the globe,” said Arnold Donald, CEO of Carnival Corporation. “Our goal is to exceed expectations of the 11.5 million guests who sail with us each year, and these new ships will offer more opportunities for our guests to create lifelong vacation memories while generating added excitement around the fast-growing global demand for cruise vacations.”

Princess Cruises’ new 145,000-ton ship will carry 3,660 passengers and will be its sixth “Royal” class vessel, featuring the successful design platform used on Royal Princess, Regal Princess and Majestic Princess, the world’s first ship designed specifically for the China market and scheduled for delivery in March 2017, as well as its sister ships – the two yet-to-be-named vessels also under construction by Fincantieri scheduled for delivery in 2019 and 2020.

“This is an extraordinary moment for the cruise sector and it is particularly rewarding for us to be able to seize all the opportunities coming from the industry growth, also thanks to our deep-rooted partnership with Carnival Corporation,” said Giuseppe Bono, CEO of Fincantieri. “These vessels will be based on the successful platforms developed for Carnival. On the back of these successful platforms, our Group today aims to further increase its order book, already at record levels, while ensuring profitability in the cruise segment.”

Tony Roberts, Princess Cruises’ vice president UK and Europe, added: “The decision to grow our fleet is testament to the success of Princess Cruises around the world. With four new ships now due for delivery, starting with Majestic Princess in March, these are incredibly exciting times for Princess Cruises.”

Additional Details on the New Ships
Holland America Line’s ship will combine classic hallmarks of the brand while featuring several of the innovative venues that were introduced on ms Koningsdam, as well as new concepts that will debut on Nieuw Statendam and additional elements unique to the new vessel.

The new Princess Cruises ship will feature Ocean Medallion Class™– a more personal, immersive, simple and seamless cruise experience made possible by Carnival Corporation’s recently announced Ocean Medallion™, a wearable device powered by a first-of-its-kind interactive technology platform enabling enhanced services and personalized experiences for guests. The ship will also feature the other signature elements that have become synonymous with the Princess guest experience such as a soaring central atrium hub with multiple dining, entertainment and retail venues; its signature Movies Under the Stars with the largest outdoor screen at sea; and 81 percent of all staterooms with balconies.

Each of Carnival Corporation’s new ships will be specifically designed and developed for each brand and the guests and markets it will serve, supporting the corporation’s overall goal of providing extraordinary vacation experiences at an exceptional value for its guests around the world. Specific features and amenities for the ships, along with deployment details, will be revealed in the coming months. 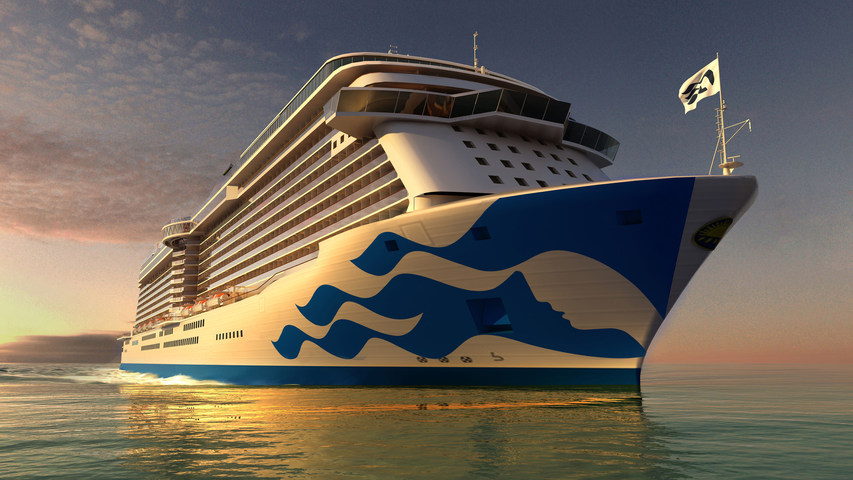 Together, these brands operate 102 ships visiting over 700 ports around the world and totaling 226,000 lower berths with 19 new ships scheduled to be delivered between 2017 and 2022.