The news that Swan Hellenic and Voyages of Discovery have cancelled the first cruises of 2017 on their ships Minerva and Voyager has been seen by many as a precursor to the closure or sale of the two famous names.

Executives at All Leisure Group (ALG), which owns both companies, have not responded to calls or emails over the New Year holiday weekend and will not – officially at least – be back at their desks until Tuesday (January 3).

One leading cruise travel agent has described the news as “grim”, while another I spoke to said the developments “sounded ominous.”

The hotel operations on board both ships are contracted to Sea Chefs, which has 8,000 staff on 50 ocean-going and river vessels around the world. A representative will be addressing crew on Voyager (below) in Singapore today, although Minerva (above)  – currently in Marseille – is not expecting a visit.

The past few years have been difficult times for ALG. It laid off 40 of the 280 staff at its Market Harborough head office in February 2016, and in June was de-listed from the Alternative Investment Market (AIM). Its shares, which were trading for almost 54p in 2014, fell to 1.8p on the decision.

One factor that kept 2015’s figures out of the red was the £2.9 million sale of their third ship – Hebridean Island Cruise’s Hebridean Princess – to HP Shipping, a company owned by a syndicate of private investors, including ALG chairman Roger Allard. The vessel has been leased back in an 8-year deal.

In August 2016, a management buy-out took over ALG’s Discover Egypt for an undisclosed sum. The buyers were a team comprised of Allard and All Leisure Holidays directors Philip Breckner and David Wiles.

Voyages of Discovery began life about 35 years ago, operating educational cruises for schoolchildren. The company was bought by ALG in 1997 and from 2002 operated the ship Discovery, which had once been owned by Princess Cruises and was used as one of the locations for the TV series The Love Boat.

The ship was popular among British passengers keen to add some educational enlightenment to their holidays, and its programme of expert guest speakers was much emulated as this market niche grew.

Discovery spent a short time in a joint venture with Cruise & Maritime Voyages before being sold and eventually scrapped.

Her replacement, the 15,343-ton Voyager, was launched in 1990 as Crown Monarch, and subsequently sailed as Walrus and Jules Verne before becoming the Alexander von Humboldt – named after a 19th-century German explorer.

The vessel had been laid up for some time when ALG bought it at auction. The company’s original plan to operate the ship alongside Discovery never came to fruition and after a refurb it was eventual re-christened in December 2012 by TV presenter Miranda Krestovnikoff.

The 556-capacity ship – 20 per cent smaller than its predecessor – was never as popular. A guest on a voyage in early December reported on a Cruise Critic forum today that there were only 280 passengers on board, including 120 travelling as singles.

Swan Hellenic celebrated its 60th anniversary in 2014. The company was taken over by P&O Cruises in 1983. Former P&O chairman Lord Sterling bought the brand in 2007, and the company was re-launched by ALG in 2008.

The 12,500-ton Minerva carries 352 passengers and claims to have one of the largest libraries at sea.

What of the future? Although ALG has yet to make an announcement, crew on board Minerva heard that one rumour was a potential buy-out by white knight Saga Cruises.

That seems unlikely, given that the over-50s specialist is looking forward to the delivery of its first newbuild ship, carrying 1,000 passengers, in 2019. Saga currently operates two ships, and once included Minerva in its fleet, under the guise of Saga Pearl.

Spokesman Paul Green said: “We have a policy of not commenting on speculation or rumours.”

Crew on board Minerva and Voyager, and passengers with cruises already booked, will have to wait a few more hours at least to see to what will happen to their jobs and their holiday plans. 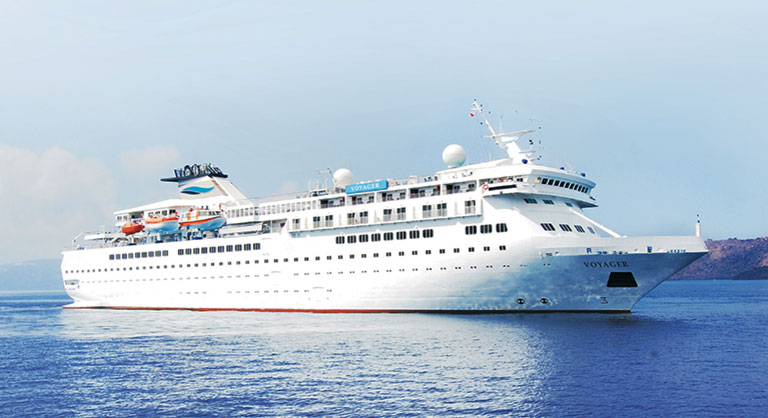